A Day in the Life: The Walkers of Birmingham 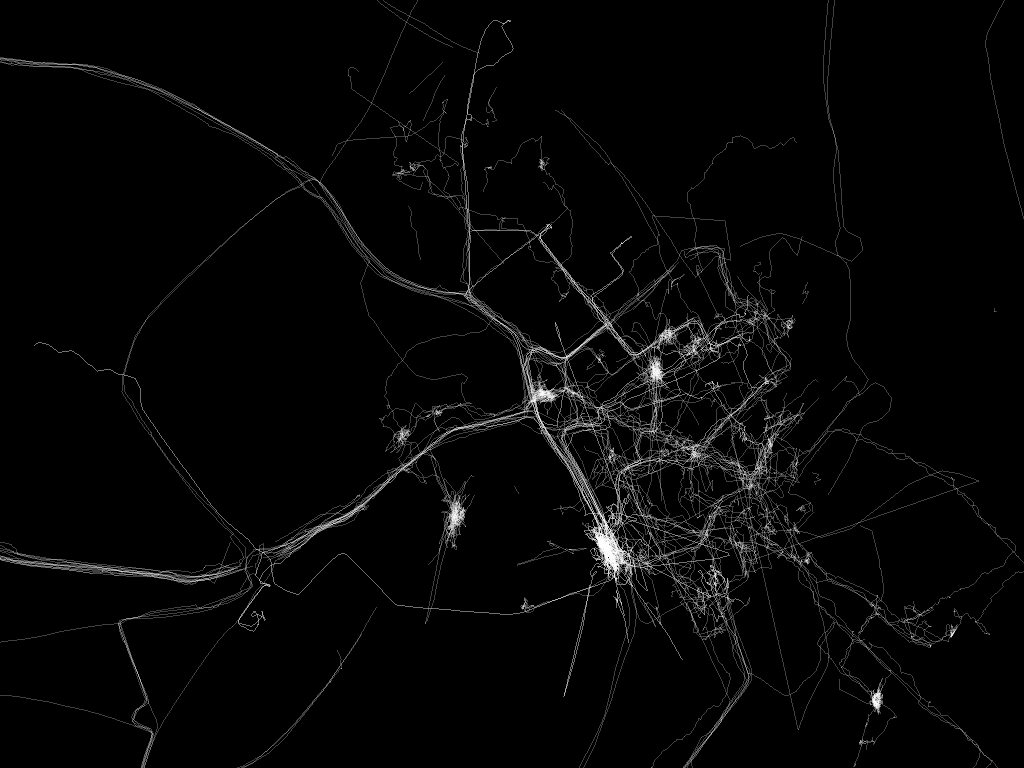 Using GPS traces, we are making a living portrait of 24 hours in Birmingham with the people who move through its streets, parks, waste grounds and tow paths on foot for the Fierce Festival and the Midlands Art Centre (MAC)

A Day in the Life – The Walkers of Birmingham is a portrait of a city as experienced at ground level. The animation emphasises walking, making lines from other forms of transportation more feint.

I read that the most popular leisure activity in Britain today is not TV or shopping, but ‘going for a walk’. We are not consumers, we are walkers. Walkers of Birmingham, making the city a civilised space, inhabited, recognised, greeted, cared for. Every walk is a performance, an affirmation of faith in ourselves and others. Sky for a roof, birdsong for a soundtrack. Celebration of the humanness of our world, the naturalness of humanity. – John Newson, project participant

The outcomes of ‘A Day in the Life, the Walkers of Birmingham’ have so far been a performance lecture given at the MAC as part of the Fierce Festival, as well as an ongoing cartographic animation with a soundtrack of participants narrating their own stories behind their traces. This animation shows a day in the life of Birmingham by playing all the GPS traces back as if they had happened on the same day, but keeping the time of day intact. A 24-hour portrait of the city is achieved with the night owls, shift workers and insomniacs making their way home as then the early morning commuters, dog walkers joggers, post men and women beginning their day. Parks and open spaces blossom during daylight hours, a cycle courier buzzes around the centre and a woman says ‘Hello’ to her Nan on the way to work.

You can also read about the project on ‘This is Tomorrow’ here, where there is an interview between James Smith and us.

We working with Peter Vasil’s openFrameworks application he has been developing with us for some time to visualise the GPS tracks. Thomas Wesselman has been periodically coming into the MAC and taking the data off the dataloggers using the BT747 free software and popping this into a Dropbox folder in the form of GPX files which I have then been putting into the database Peter conceived for this. Because we want the animation to represent a single day, we then process the GPX files so that if someone has taken a GPS out for a number of days, they are split into different ‘users’ as far as the animation is concerned. This is done manually using Viking, another free, open source programme. Peter has written a GPX importer for the database as well as a python script for changing all the timestamps to one date.

The GPSs themselves, 9 Blumax Bluetooth GPS-4044 Loggers, where purchased and then generously lent by the Mixed Reality Lab where Dan is currently an associate artist.

Thank you to Brian Prangle, one of the citizen mappers of Birmingham, involved in the West Midlands section of the wonderful OpenStreetMap, the free wiki world map for his advice, engagement, humour and GPS tracks.

This project would not be possible without the people who have taken out the GPSs, those that came in and talked to us about their walks, the great MAC front-of-house staff, Dan Whitehouse Next Generation Producer, Laura, Harun, Nicola and all at Fierce and Steve Benford at the MRL, to all of whom we say a huge thank you.