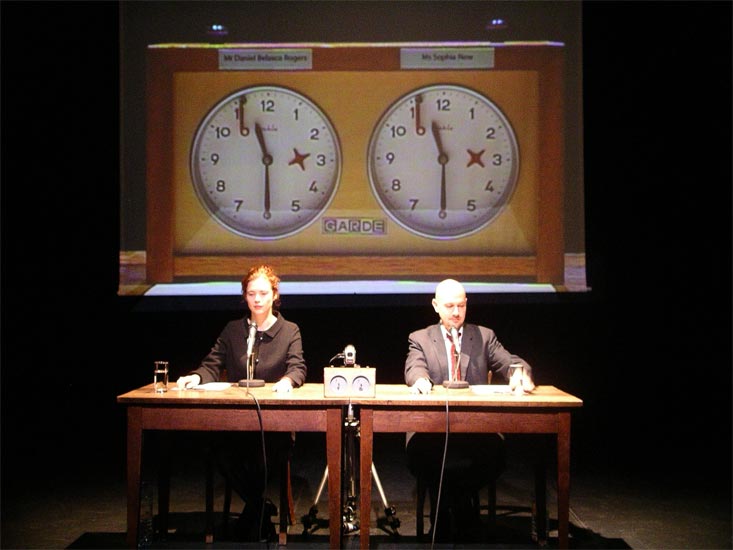 The Last Hour is one of plan b’s series of works with spontaneous, real time text. Like How Do You Keep Talking, what we say is not rehearsed or set but happens in the moment. We set ourselves the task of saying everything we have left out of our relationship until now, as if we had one last hour together.

We sit behind a long table with two microphones,  dressed formally as if attending a press conference. There is a carafe of water and a glass for each of us. The only other object on the table is a clock used in chess competitions. Behind us is a large video projection of the two faces of the chess clock.

The chess clock is set at 11.30 on each dial. We each have half an hour to tell the other and the audience the things we have never said, things we remember or would just like the other to know before the hour passes. At the end of each person’s half hour, the chess clocks’ red indicator falls. When this happens, that person can no longer speak and has to wait for the other to finish their half hour.

This concentrated hour is part endurance, part pleasure; we delve into shared territory or confess secrets the other never knew. We trigger thoughts and memories, one prompting the other. All the time we risk drying up, suddenly unable to think of the easy anecdote and having to dredge up the raw, unrehearsed material we all carry, about those closest to us.

Although only one hour, The Last Hour continues our ‘durational’ approach, setting a simple rule or context and letting it play out in front of the spectators.

Previous performances of The Last Hour

In 2005 we were invited to perform The Last Hour at the Experimentica Festival at Chapter Arts in Cardiff. As Sophia was 7 months pregnant, we decided that we would address our unborn child during the hour. We named this unique version The First Hour. Our daughter Ruby was born in December 2005.