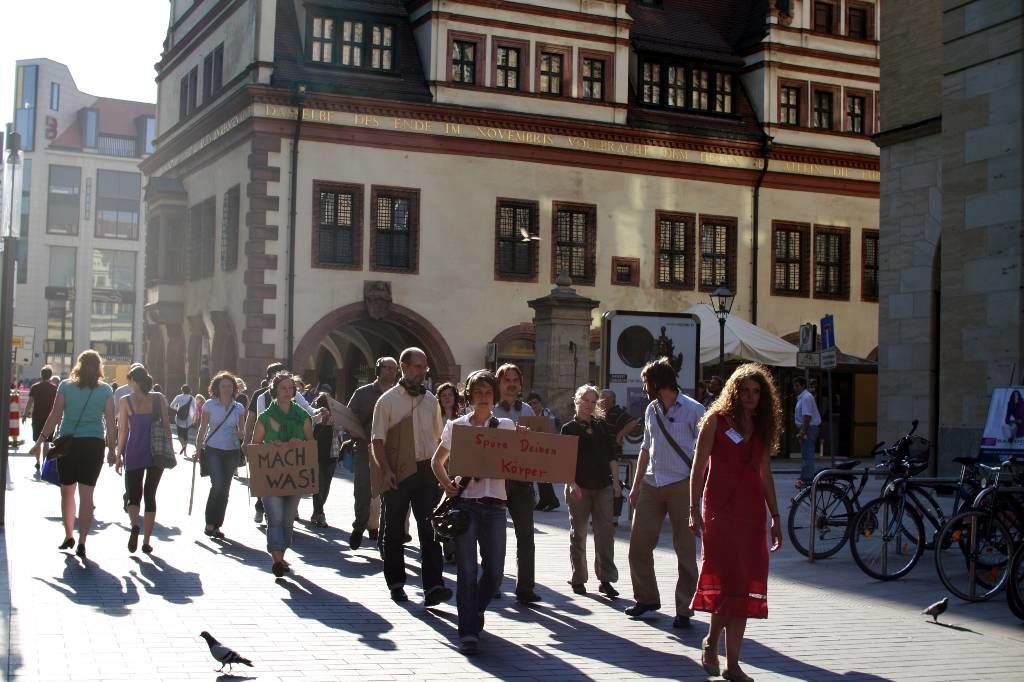 plan b asked, how could we experience/ remember/ reconsider pivotal historical acts in the same space 20 years later? And could we shift the attention of the listener/walker into reconsidering these urban spaces as sites of resistance? In The Monday Walks, we explored how to create collective performative experiences through the power of suggestion with minimal technical intervention.

The Monday Walks resulted in two main pieces. The first was a GPS animation of recreations of the journeys people took to the demonstrations in 1989. Students from the University of Leipzig interviewed people from Leipzig who had taken part in the demonstrations, and then the students reconstructed their journeys, following the specific path taken by the demonstrators. These reconstructions were recorded on GPSs, and the journeys were then visualised with plan b and the avr::ptr team of computer scientists. The video below shows the animation of all of the journeys, as they converge on Leipzig from neighbouring suburbs, cities and districts and follow a path around the ring of the city.

A guided walk through Leipzig with live intervention and audio

The second outcome of the Monday Walks was a walk re-tracing part of the Monday Demonstrations, finishing where many of the demonstrations ended, at the Stasi headquarters, the Runde Ecke. The walk was developed in collaboration with the students and it featured original sound material from the actual time, interviews with Leipzigers who took part in the demonstrations, and some live interventions into the space and social fabric of the city.

The Monday Walks project was made in collaboration with students from the University of Leipzig and the Tanz Archiv in the context of the play! Leipzig Conference and Performance Festival. During the project, we also kept a blog to continue communicating with each other and share the experiences of collecting the GPS and interview material and to reflect about workshops that lead up to the production period in June. You can take a look behind the scenes at https://mondaywalks.blogspot.com/

We would like to thank the students of the University of Leipzig, Marcus Quent, Peter Vasil and friends, the staff of the Tanz Archiv Leipzig, Prof. Patrick Primavesi, Elaine New and Nathaniel Nelson.