Our House projects the 1930s semi-detached house my father grew up in, I grew up in and in which my mother still lives into another larger building, as if a ghost house from a different dimension co-existed within its walls.

The spectator doesn’t just encounter the house as it stands today, but the layers the house contains, old family photographs of different generations squinting into the sun outside the front door, the voices of my parents remembering what the house was like from their childhoods on, recordings of each room, the taps running, the fridge, the creak on the third and tenth step of the staircase.

As in my other solo work, through uncovering the detail of my past and surroundings, the work evokes the spectators’ own personal history, raising issues of memory, personal documentation, the persistence of these spaces in our minds, the mnemonic function of spaces and the inevitable sense of loss encountering spaces that have changed. 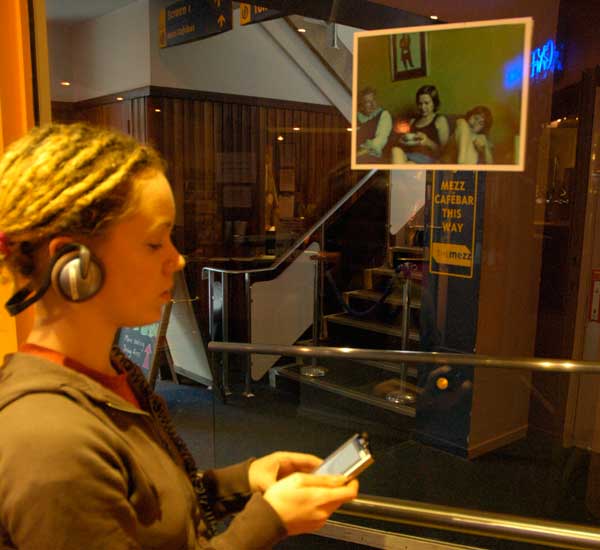 This indoor locative media piece was made using the mscape software and ran on iPAQs equipped with infra-red (IR) ports.

The ‘host’ space or venue was pre-set with IR beacons so that as the spectator moved around, sequences of different rooms and spaces from the ground floor of the house I grew up were triggered on the hand-held device.

Each room sequence contained interviews with me and my parents and family photographs from the 1940s onwards.

By documenting a family house in this way and opening up its space virtually, in a public building, the work examines the evocation of spaces from our past, a wealth of which we all carry around with us and how these memories can be triggered by and effect other spaces we encounter.

I am particularly drawn to the possibilities of new locative technology firstly because like memory and imagination, a space can be filled with information for one user but transparent to others, leaving the actual space almost untouched by intervention and secondly because it is non-linear, the spectator explores a landscape at his/her pace in no pre-defined order, eliciting a less passive role in the experiencing of the work, using their own body to move through both the virtual and the real space.
Our House was premiered at the Broadway Cinema in Nottingham in 2005 as part of the Radiator festival and also featured in First Play at HAU in 2006.