A Bicycle Made for You

six micro-films in search of ‘bike angels’ in prague 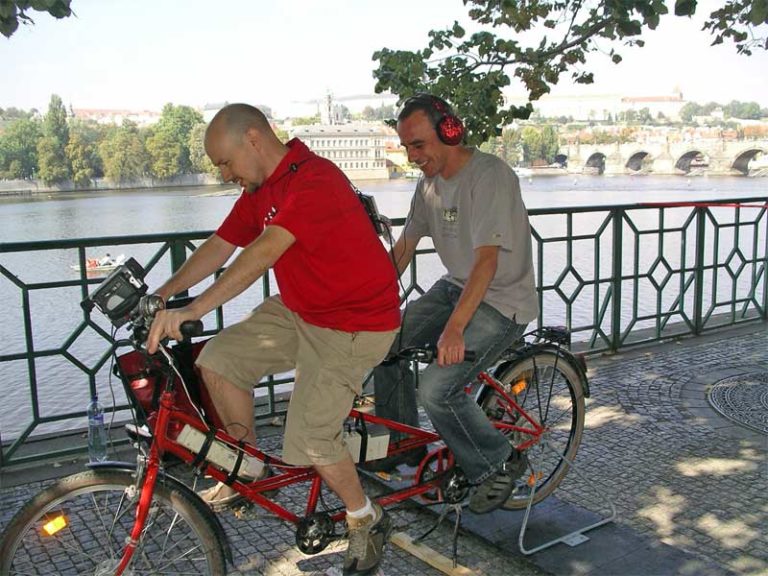 A bicycle made for you was a new piece made especially for the anti-car / pro-cycling festival auto*mat in Prague, September 2006. A bicycle made for you was a play on the song ‘Daisy Bell’ (better known as ‘Daisy, Daisy’) about falling in love on a tandem. plan b’s red tandem was seen on the streets of Prague in the days leading up to the showing, recording video footage and gathering material for a special film presentation for one person at a time. The tandem was the basis for the piece, the research tool, the means of production, and the cinema for the final presentation.

Riding a tandem we think about what it is to travel through life together, the other provides extra strength but also extra weight. Sometimes you are in balance with each other and the way is easy. Sometimes not. We take turns being the one who steers and being the one who has to trust that the other will make the right decision. We wonder what gods, what angels look over and protect cyclists in general and tandem riders in particular. Is there a patron saint of cyclists?

In our own personal mythology, ‘Bike Angel’ is our name for the people who put wood at the bottom of particularly high kerbs, create makeshift ramps, or break through nonsensical barriers, making the cyclists life smoother and easier. They pick up bikes when they have fallen over, turn off bike lights and generally look out for other cyclists. As part of auto*mat’s profile raising exercises in car-clogged Prague, they have also used the angel metaphor to great effect as can be seen on their web site here. We donned white rain capes, imitating the architectural angels of Prague, we held our pumps and bike locks as proudly as the wreaths and garlands they held. 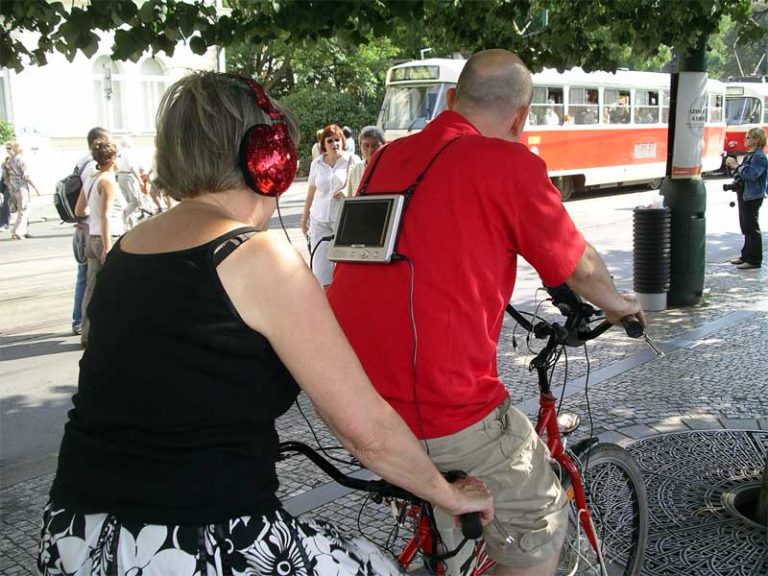 an intimate film presentation on the back of a tandem

The spectator is greeted by one of us and led onto the tandem that is held stationary in a bike stand. The other performer is already on the front seat of the tandem, ready to go. Hanging on their back is a small screen. Our famous Ruby Headphones are given to the spectator and the film performance begins.

After a rendition of ‘Daisy, Daisy’, live from the front of the bike, where our camera acts as live feed and as the player for the pre-recorded material, the film slowly flickers into life as the spectator and performer pedal together. (Unfortunately, our dream of really using pedal power to power the film has not yet been realised). Mixing live camera work with pre-recorded material in this way, we play with the format of film and cycling. A speedy one-minute tour around the half-kilometre-long Wenceslas Square, as well as a slow backwards pedal for a mysterious sequence taken early in the morning on Charles Bridge take ‘A bicycle made for you’ away from a simple recreation of a tandem journey and into the magical realm that film on a bike can offer.

A bicycle made for you was commissioned by Motus and Alfred ve Devore as part of the auto*mat festival, Prague, September 2006. 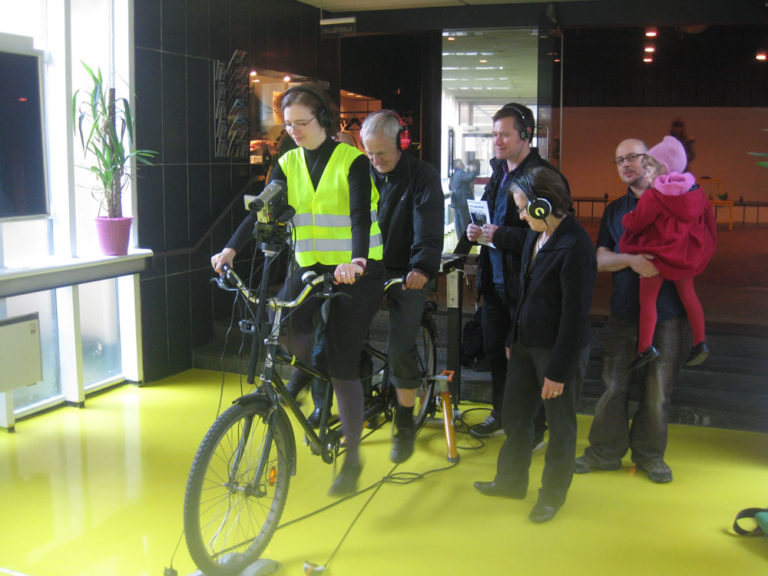 Another version of “A Bicycle Made for You” was created in Copenhagen.

Not knowing very much about Copenhagen, we decided to set ourselves the task of riding to all the streets with associations of love or being together or heartache or breaking up. A friend asks the city’s cycle couriers for appropriate streets and they told us about streets with such names as (translated): Happiness island Alley, Heart of Joy Street, Cupid Park, Tranquillity Street, Soul Stands, and many more

We invited participants to climb on board, start pedalling and we showed them a Copenhagen they may not have known, seen through the eyes of two people looking for answers in a city they are unfamiliar with, looking for clues in the names of streets, the angle of the sun, the kindness of strangers.