a collaboration between plan b and agentur kriwomasow

This is a present from a small, distant world; a token of our sounds, our science, our images, our music, our thoughts and our feelings. We are attempting to survive our time so we may live into yours. U.S. President Jimmy Carter, on the Voyager Golden Record

The Schwedt Project was a means of researching how to experience, investigate, preserve and remember Wohnkomplex 7, an area of Schwedt in Germany. With the wilderness encroaching we want to know what will remain when the buildings and people have disappeared? What memories linger in the half-empty landscape? What can we learn from this place for the future?

For our third Rollende Road Schau (see also Stadtbasteln and Stimmen über Berlin), the location was Schwedt, a city on the Polish/German border in Brandenburg. Since the fall of the Berlin wall, the city has undergone major changes, not least of all being the loss of a substantial percentage of its population leaving, primarily seeking employment elsewhere. Schwedt was one of the first cities in former East Germany that recognised the problem of population decline and decided to meet it head on and, most importantly, name it as such.

The Rollende Road Schau chose to locate itself in an area particularly affected by a loss in popultation, the Wohnkomplex 7 (living complex 7) or WK7. Near the refinery, the WK7 was built to house thousands of its workers within its pre-fabricated tower blocks (PLattenbau). This housing is to a greater extent, surplus to requirement. Now the WK7 is in the process of ‘Ruckbau,’ or restructuring, which entails knocking down most of the redundant housing and reformulating the remainder into larger flats with improved conditions.

This is a very particular urban landscape, one on the edge of a shrinking city. The woodland and grassland is encroaching onto the pavements. You can sit in the middle of a meadow, which not so long ago had been the ground on which a tower block stood. Or one can look across to see a field where a school once stood.

The Schwedt Project was conceived to present this area of the city to the people in a new way, and to consider Schwedt as an interesting model for future settlements, a situation that could be learnt from and should be recorded and stored for those of future times. Working with Peter Göhler and Andreas Kebelmann (agentur kriwomasow), we devised a three-part experience for two spectators at a time.

Part I was a slide show presentation of images from Schwedt today and in the past, with interviews taken between March and June of 2006 with members of the Seniorenverein des PCK Schwedt (Pensioners’ Club of the chemical works in Schwedt). Spectators were led to a covered area in the middle of an open piece of grassland on the site of a tower block and the slide show was presented on a monitor with headphones and two armchairs facing some of the remaining buildings. 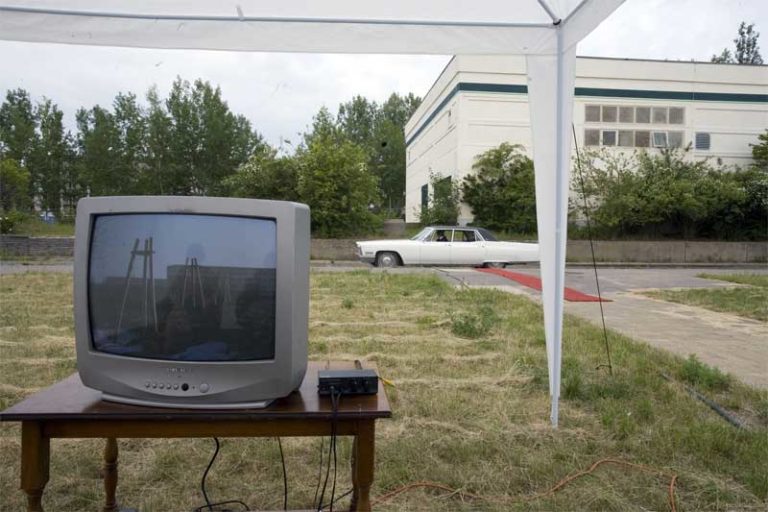 At the end of the slide show, you were invited to enter the white Cadillac that by that time had pulled up at the other end of a red carpet that led from the tented area to the edge of the road. Part II was a tour around the site of WK7 by the driver of a Cadillac Fleetwood Brougham. The driver, (either Peter or Andreas) would open the doors for the spectators but not talk to them directly. He turned on the radio inside the car and it would direct the passengers not to speak to the driver directly and that they were on a mission, the details of which would become clear to them. The specially constructed radio piece (hörspiel) would then underwrite what the passenger could see out of the window with filmic music and environmental sounds. The voices of plan b would periodically break in as if they were interference from police radio and it gradually became clear that plan b’s mission was to collect the memories and associations of the passengers of the car for inclusion on a ‘Golden Record’ that would be sent into space, perhaps to return in a thousand years when CDs have become the relics that LPs are today.

At the end of the car journey, participants were met by two individuals in white space suits. After having their photograph taken, they were guided into another tented structure where two typewriters sat on two tables. Each participant helped to fill in a form and was asked to share personal information needed for the Golden Record. This information was prompted by and based on the journey they had just taken or their experience of Schwedt. We explained that the information was burnt onto a Golden Record, which, like the one of Voyager in the 70s, was going to be launched into space. This would perhaps return to the earth in a thousand years. We wanted to know what would remind them of home and what music they would want to take on a long voyage. We asked each participant to give a message to the people of Schwedt in the future and recorded this so that they could address them directly from the Golden Record. At the end of the form was a large box in which we asked the participants to draw what the earth will look like in a thousand years.

The pictures of the participants in front of the Cadillac, the recorded messages, the drawings of the earth in a thousand years and a selection of the requested music was then burnt onto a gold CD Rom becoming what we described as a ‘Golden Record.’

On the last night of the RRS in Schwedt, the Golden Record was introduced as we presented a selection of the images and messages on it before gathering everyone together in an open area next to the tents and launching the record into the air under a golden helium-filled balloon. The launch took place on the 18th July 2006 at 22:43. We await contact from the life forms that might have received it.