My Home is my Castle 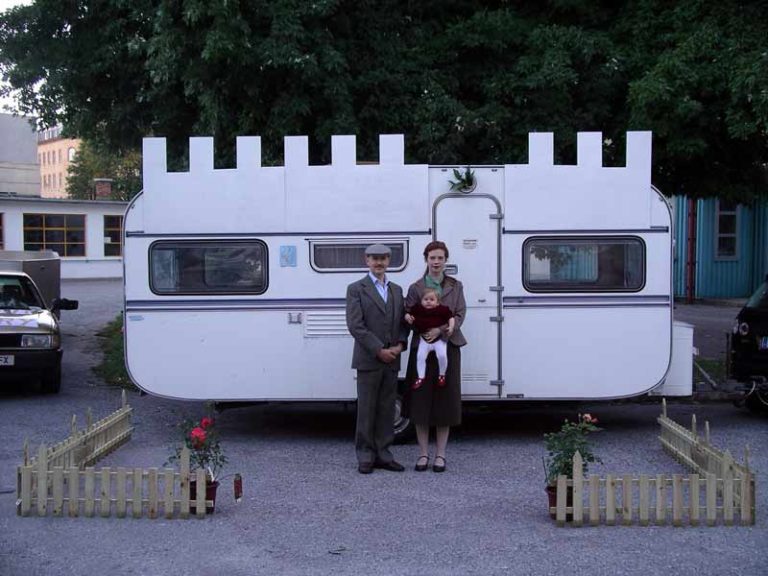 Arriving in a village that we had never been to before, was as plan b set about making ouselves at home. As rather extravagant and eccentric nomads, and somewhat fresh to caravanning, we set about claiming a small piece of land and making ouselves at home by creating their own tiny kingdom for a day. Busy laying out a small fence, carpet, roses and picnic table, we finally stop and put the kettle on. Dressed as holidaying aristocracy, this British family was armed with tea, cake and the hope that someone will join them. Will curiosity intrigue the locals enough to join them? Will the hospitality be returned? More importantly, will the people of Styria invite them into their own ‘castles?’ plan b’s adventures in their quest for personal kingdoms were captured on video and replayed weekly for the Campshow audience.

‘my home is my castle’ was part of Club Real and Haiko Pfost’s project “Campshow Steiermark,” featured in the annual steirischer herbst festival held in Graz. The project invited five artists and artists’ groups to travel through the state of Styria in caravans modified for their use. Each week each artist group would return to base camp in Graz to share their experiences and take part in nightly performances on the ramp outside the festival centre hosted by Club Real. For ‘my home is my castle’, we wanted to examine notions of home through the metaphor of personal kingdom, finding out how such notions began and developed. Using the peculiarly British take on tea and teatime we looked for a corresponding social space and function in Austrian culture. 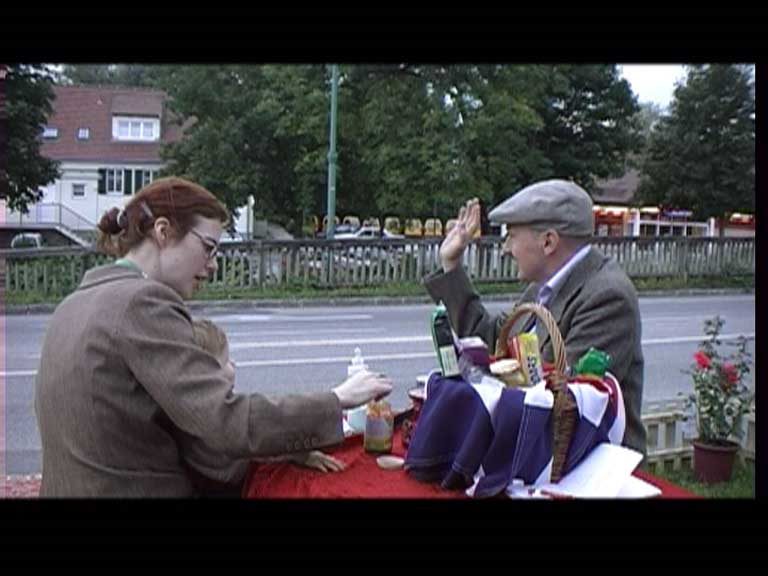 Haiko Pfost and Club Real had decided on six different towns in Styria for us; meaning that we went to two each week. Our caravan was not really liveable and so we always travelled back to Graz for the nights, apart from the one night we spent with the Mosers at their guesthouse in Fohnsdorf.

Our method of relaying what had happened to us on the road for the audience in Graz was to make three short films, one a week, that were projected back onto the side of our caravan back at the Campshow base in front of the festival centre.

All in all we travelled 1,125 km, made 18 litres of tea, got through 8 packets of biscuits (ginger nuts, garibaldi, digestives and chocolate hobnobs) and made three films recounting our adventures in the towns and villages of Styria: Weiz – Feldbach, Fohnsdorf – Liezen and Kirchbach – Spielfeld. We were invited by two families for afternoon refreshment in Feldbach and Graz.

People who drank tea with us in the various places:

copies of the films

As well as the documentation below, there is a DVD available of all three films. They are mostly in German without subtitles. Please email us if you would like us to send you one stating whether you are an individual or institution.

*The phrase “An Englishman’s home is his castle” was coined by Sir Edward Coke (1552-1634), Attorney General to Elizabeth I and Lord Chief Justice to James I in 1664.